It’s not news that elephants are endangered; for literally thousands of years ivory has driven hunters to kill these magnificent beasts. Combine this deliberate destruction with increased land use change and habitat transformation by private enterprise, international aid and government expansion across Africa and these magnificent beasts are still under threat even within the national parks and other protected areas set aside for them.

However, before we get too carried away with horrific idea that elephants may well become extinct; there is another side to this.

Two separate taxa, or races, of elephants exist in Africa today: the savannah elephant, which is well known and has been studied and valued by the international tourist trade for decades, and the diminutive forest elephant, which until recently has remained in obscurity beneath the trees. In the Congo Basin, an area noted for being one of the great wilderness areas with the second largest rainforest on earth – it is home to an outstanding range of biological diversity; forest elephants have until recent decades thrived. These types of wildernesses have always been recognised for their high conservation value, being home to a wide variety of flora and fauna, and as such provide invaluable resources of timber, minerals and other natural resources. The Congo Basin is a typical case where the resources available are in high demand in rich, industrial nations and are also critical to the economies of poor nations. And it is at this point we in the Western developed world need to be very careful about conservation and conservation techniques; the international conservation efforts are aimed at managing and promoting sustainable natural resource exploitation and functional ecosystems. It is incredibly important that we recognise the needs of people in the developing world, and try to ensure they are able to exploit their natural resources in ways that do not fundamentally alter the ecology of the environment, upon which millions of rural people still depend.

The high value of resources in these wilderness areas means that it is only fair that Africans have an opportunity to exploit and benefit from them and are encouraged to do so legally, ethically and with an eye on their own local ecology.

Complications occur as industrial expansion pushes into the wildernesses to obtain these natural resources, an expansion that relies on a network of roads and rail infrastructure. It is this increase in roads that appears to be causing some of the biggest threats to the forest elephants. Illegal elephant killings tend to occur close to roads, since these areas are easily accessible, so the density of forest elephants in the protected areas is determined, not by the size of the area but by how many roads criss-cross through the wilderness.

Elephants are by their nature, shy and avoid human contact as much as possible, so how are they reacting to the increasing number of roads across their home ranges? Will they adopt a “siege” mentality and reduce their home range to avoid roads, or a “skirmish” strategy, where they will continue to range widely, irrespective of the number of roads?

I spoke with Stephen Blake of the Wildlife Conservation Society and Max Planck Institute of Ornithology who has recently headed up a study into this very issue. His team fitted a large sample of forest elephants in the Congo Basin with GPS telemetry collars, so that they could track their roaming behaviour. They collected data from 28 elephants located in conservation areas in the Congo, Central African Republic and Gabon. 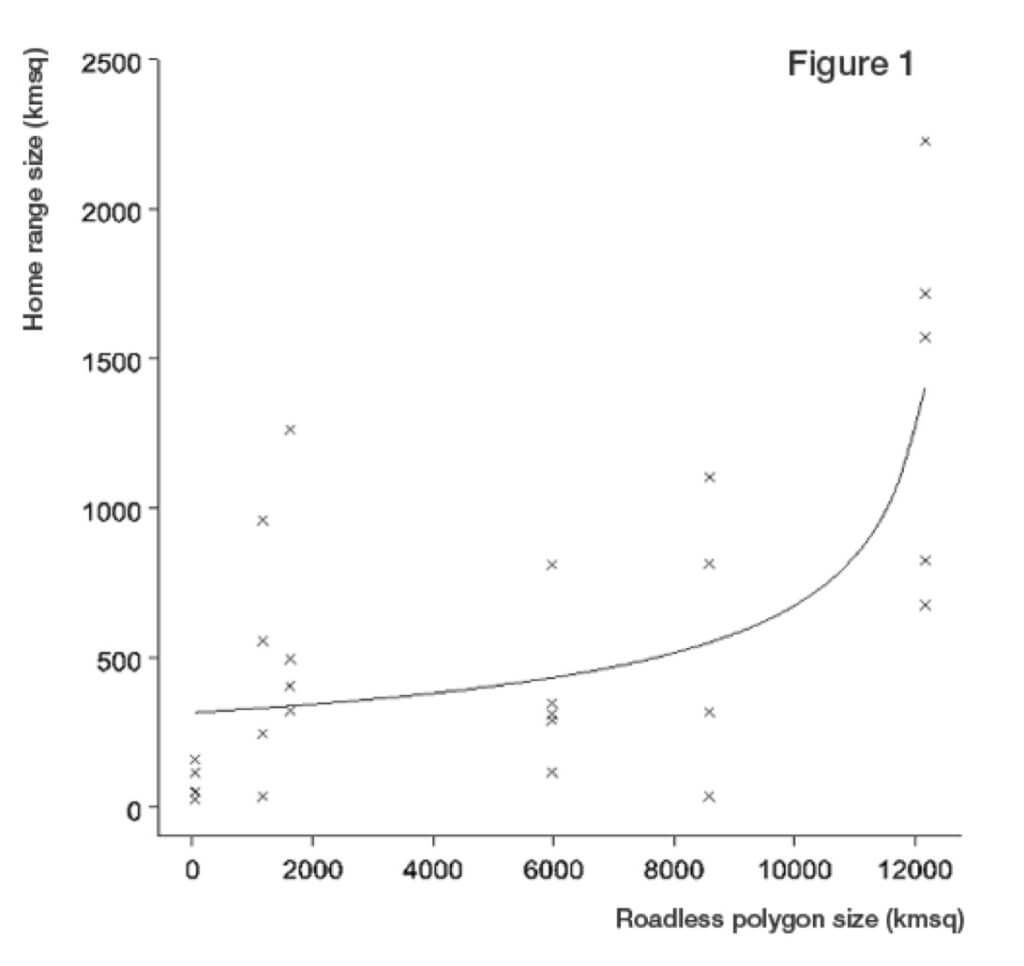 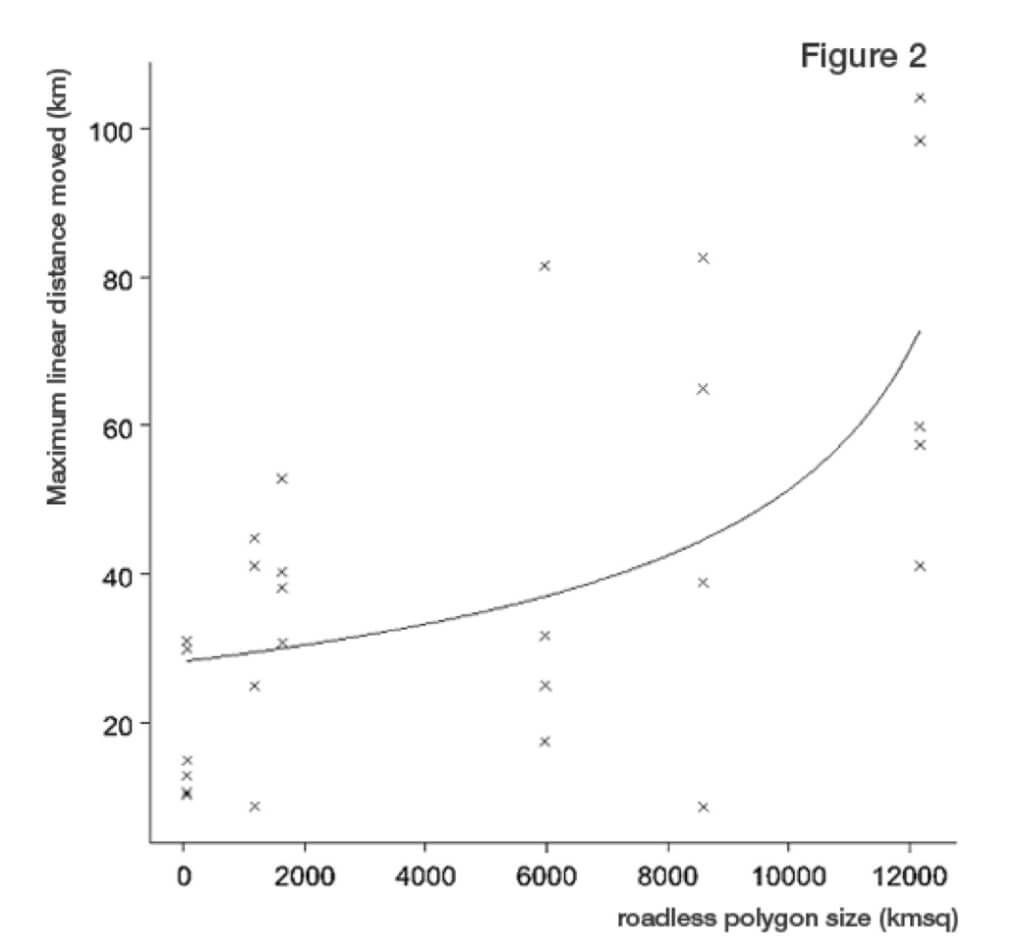 “The data we collected covered the sex of the elephant, the site (the protected area in which the elephants were collared), the number of roads in the area, the number of days the elephants were collared,” explained Stephen. “I initially analysed the result collected in Genstat, using linear regression for data exploration followed by fitting standard curves to the data (Figures 1 and 2). Genstat was vital in the research programme as I can trust the statistical procedures. I was able to talk directly with developers when I came up against any queries. I have found the Genstat support team to be extremely helpful, I usually get a response to a query within 24 hours and often much sooner. We could have gone much further with the analysis, but in order to understand the influence of roads on forest elephant ranging, the regression options in the Genstat menu showed us clear statistical patterns.”

Results indicated that the forest elephants routinely crossed protected roads, however only one elephant crossed an unprotected road, and of these one did so, as far away from the nearest village as she could, and her speed increased as she crossed the road.

“Our study showed that elephants seem to adopt a siege mentality with the encroaching roads”, said Stephen Blake, “and the issue with this is that over time the elephants will have less and less access to food, in quantity and variety, leading to food competition and aggression; both of which are likely to lead to a reduction in population.”

“The main issue seems to be that elephants are risk averse, hence why they avoid roads where they can. So here we have a problem; central African states need the income earned from the natural resources found in their countries, but not only do we not want to see the elephants themselves disappear, a change like that to any ecosystem is likely to have more wide ranging impacts.”

“There are options for policies to overcome the issues, before it is too late,” says Stephen. “Based on our research, we recommend that no new roads are built on existing forest elephant conservation areas, but to access the natural resources near these sites temporary roads should be built, so that once the resources are exhausted the area can easily return to natural wilderness. The other option is to try to reduce the elephants’ fear of roads, by preventing settlements on the roads, enforcing anti-poaching. These are of course expensive options, but without addressing this we face losing these beautiful creatures.”